SCS is inherited in an autosomal dominant pattern. Based on murine and human genetic analyses, the phenotypic variation in SCS has been attributed to mutations in the TWIST 1 gene. Over 100 TWIST1 mutations have been identified. The significant variability in mutation may reflect the variation in phenotype.[2] Although the specific mutation e.g., missense, point, etc., may differ, it is likely that ensuing haploinsufficiency is the underlying etiological mechanism.[5][8] TWIST 1 is speculated to play an essential role in the formation of the head mesenchyme and as such, qualitative or quantitative impairment of the protein product leads to the observed craniosynostosis.[9]

Strabismus: Strabismus has been noted in over 50% of individuals with SCS.[1][7] See Craniosynostosis Syndromes for further discussion of the underlying mechanism for strabismus. Most patients specifically present with V-pattern strabismus with exotropia larger in upgaze.[10]

Vertical strabismus is another commonly noted abnormality with Jadico, et. al., observing it in approximately 60% of their patients with SCS.[10]

Ptosis is commonly reported in patients, although the exact prevalence has varied in studies, ranging from 59% to 82% of patients.[11][12] Ptosis often results from a defective functioning or agenesis of the levator palpebrae muscle. [3] 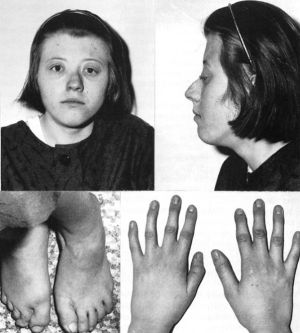 Patient with Saethre-Chotzen syndrome with facial asymmetry, flat forehead, low hairline, left ptosis, lateral deviation of the great toes, shortened toes, and partial syndactyly of fingers 2 and 3. Image courtesy of the March of Dimes, via BCSC.

Other ocular manifestations seen in craniosynostosis, including the etiologies of increased intracranial pressure, exposure keratopathy, amblyopia, and astigmatism, are described in Craniosynostosis Syndromes.

The prevalence of SCS is estimated to range from 1 in 25,000 to 1 in 50,000 live births, although this is probably underestimated due to extensive phenotypic variability.[4][11] Occurrence is equal in males and females.[13] Given that this is an autosomal dominant condition, many individuals have an affected parent. However, although rarer, de novo mutations have also been observed.[14]

Diagnosis of SCS begins with history and physical examination. However, there is no single pathognomonic feature associated with the syndrome, and it is challenging to diagnose based on clinical features alone. Genetic testing is important to confirm the diagnosis.[2]

Classically, patients will present with typical clinical findings such as craniosynostosis. Given its autosomal dominant inheritance, patients may have a familial history of related, albeit perhaps less severe, clinical findings such as abnormal skull shape. However, the family history may appear unremarkable due to the wide phenotypic variability.[15]  The diagnosis of several types of malignancies including Hodgkins disease, testicular carcinoma, and nasopharyngeal carcinoma were reported in several family members of patients diagnosed with SCS.[7]

Physical examination is an integral component of the diagnosis of SCS.

Sensorimotor examination should be performed with strabismus measurements in the cardinal positions, specifically looking for V-pattern strabismus with exotropia larger in upgaze than in downgaze. The V-pattern is often accompanied by over-elevation in adduction (pseudo-inferior oblique overaction), with possible superior oblique underaction occurring ipsilateral to the fused coronal suture.[16]

In contrast to other craniofacial abnormalities, severe midfacial hypoplasia is less commonly noted in SCS, and so proptosis is less common. Instead, ptosis is more prevalent.[7] Ophthalmic examination should include measurements of eyelid position and function such MRD1 and levator function.

Ear: SCS characteristically presents with small, low-set ears that are posteriorly rotated and have prominent crura.[9] Conductive, mixed, and sensorineural hearing deficits may also be present.[17]

Other systems: Orthodontic, cardiac, and neurological abnormalities have also been documented in patients with SCS.[5][19] [20]

Diagnosis of SCS is primarily clinical, although diagnostic tests are useful for confirmation. Given that most patients have mutations in the TWIST gene, genetic evaluations are integral.[21] Even if the ophthalmologist, or clinician, does not already suspect SCS, patients with craniosynostosis and syndactyly or clinodactyly need to be provided a complete genetic workup. Where SCS is presumed despite normal molecular testing and clinically inconsistent findings, karyotyping should be a consideration.[22] [23]

Ultrasound may be utilized as early as the 19th week to assess for the presence of diagnostic markers such as an irregularly shaped fetal skull, which may be indicative of coronal synostosis. However, given the phenotypic variability of the condition, ultrasound cannot provide a definitive diagnosis. If SCS is suspected prenatally, either due to familial history or suspicious sonographic findings, genetic testing should be offered to families.[24]

The complex anatomy of patients with SCS can make strabismus difficult to treat.[1] Orbital imaging can be useful for guiding the surgical plan through visualization of the extraocular muscles. MRI using T2 fast spin echo sequences is the recommended imaging modality. Direct  coronal images are preferred.[25]  MRI of the brain can also be performed for additional evaluation when increased intracranial pressure is a concern.

Muenke syndrome: Patients may present with features clinically similar to SCS. However, some work has been done to differentiate between the two, with patients with Muenke syndrome having a higher incidence of intellectual disabilities and patients with SCS having a higher incidence of intracranial hypertension and clinically significant ptosis.[5] Moreover, patients with SCS may have more ophthalmic abnormalities such as strabismus, ptosis, astigmatism, and amblyopia. [10]

Isolated unilateral coronal synostosis: Patients who have this abnormality may develop facial asymmetry if not treated.

Baller-Gerold syndrome: Individuals with this condition have bilateral craniosynostosis with brachycephaly. However, they typically additionally present with proptosis and poikiloderma, which are uncommon in SCS.[15]

Apert syndrome: A highly arched palate, cleft palate, and dental anomalies have been reported both in patients with Apert syndrome and SCS.[2]  However, the severe midfacial hypoplasia that is common in Apert, Crouzon, and Pfeiffer syndromes is less common in SCS.[7]

Given the variety of systems implicated in SCS, a multidisciplinary approach is required for the appropriate management and treatment of this condition. Pediatricians, ophthalmologists, otolaryngologists, and orthopedists should be consulted for comprehensive evaluation and development of a treatment plan for these patients.

Post-natal care is centered around immediate treatment of airway-related issues, if applicable. Nutrition may also be of concern, particularly if facial abnormalities prevent requisite oral intake.

Because ophthalmological issues are common within this patient population, routine comprehensive evaluations with an ophthalmologist are indicated. Examination is recommended at the time of diagnosis, before and after craniofacial surgery, biannually until 7-9 years of age, and yearly through adolescence. These examinations should assess for strabismus, amblyopia, refractive error, keratopathy, optic neuropathy, nasolacrimal outflow abnormalities, papilledema, and ptosis. Dilated fundoscopic examinations are integral within this population due to the greater prevalence of elevated intracranial pressure.[2]

Children who have clinically significant ptosis or strabismus should be treated early to prevent amblyopia, either using patching or surgery. Recommendations for timing are not well established. Some studies have found that waiting until after craniofacial surgery reduces the likelihood of having to conduct further corrective operations.[10][2] However, another study found that improved binocularity with early strabismus surgery may outweigh the risk of future changes in craniofacial anatomy.[26]

Given the possibility of elevated intracranial pressure in patients with SCS, surgical treatment to address this may be necessary within the first year of life. Cranial vault expansion, which is needed to enable appropriate brain growth, traditionally occurs between 9 and 12 months of age. Further corrective procedures may be necessary to further increase cranial volume. By the age of 3 or 4, surgery can be utilized to close remaining full-thickness cranial defects. If required, patients may also receive corrective surgery for midface hypoplasia during late childhood or early adolescence.[27]

For prevention of exposure keratopathy and exophthalmos from postoperative orbital edema after craniofacial surgery, ophthalmology follow-up should be performed 2 months after the surgery to monitor for corneal risk factors. [1]

Management and treatment of other concerns such as ocular, auditory, cardiac, developmental, etc., also necessitate consideration. Audiologic examination for hearing loss is indicated in these patients. If needed, they are treated in the standard manner using binaural amplification or possibly cochlear implantation.[17] Other routine assessments include a routine cardiac exam, examining for sleep apnea, and screening for musculoskeletal anomalies and developmental delays.[15]