Xerophthalmia refers to the spectrum of ocular disease caused by severe Vitamin A deficiency (VAD). Vitamin A serves several essential functions in the eye, and deficiency can lead to a constellation of ocular signs and symptoms that affect the conjunctiva, cornea, and retina. Xerophthalmia continues to be a leading cause of preventable blindness in developing countries[1]. Unfortunately, xerophthalmia signifies a severity of VAD that causes significant morbidity and mortality from malnutrition and increased susceptibility to mucosal infections.

VAD is among the leading causes of blindness worldwide, estimated to blind half a million children each year[2]. Although VAD is rarely seen in developed countries, it remains a public health concern in more than half of all countries, mostly affecting young children in impoverished regions. The World Health Organization (WHO) estimates that 228 million children have VAD, causing 1-3 million childhood deaths and 5-10 million cases of eye disease. VAD is especially prevalent in Africa and South-East Asia, where young children and pregnant women in low-income countries are disproportionally affected[3][4].

In the United States, VAD is rare. In 2013, it was estimated at 0.3%[5] [6]. VAD usually involves a malabsorptive process, such as inflammatory bowel disease or post-gastric bypass surgery, or a severely restrictive diet.

Vitamin A is a fat-soluble vitamin that humans derive primarily from diet. It has several essential functions in the body, including cell development, metabolism, immune function, vision, and reproductive function.

Dietary sources of preformed vitamin A include dark leafy greens, orange-colored vegetables, fish liver oils, liver, egg yolks, butter, and vitamin A-fortified dairy products. A variety of other foods contain beta-carotene and other provitamin carotenoids, which get converted into vitamin A. These include green leafy and yellow vegetables, carrots, and deep- or bright-colored fruits. Once consumed, Vitamin A is hydrolyzed by pancreatic and intestinal enzymes, emulsified with dietary fats and bile acids, and absorbed in the duodenum. The liver stores 80-90% of the body’s vitamin A in hepatic stellate cells, and the remainder is stored in adipose tissue and the pancreas. Stored vitamin A is released into the circulation bound to prealbumin (transthyretin) and retinol-binding protein. Disruption in any of these processes can lead to VAD[5].

The recommended dietary allowance of vitamin A is 700ug/day in females and 900ug/day in the males. For children and pregnant or lactating women, the recommended amount is 300-900, 770, and 1300ug/day, respectively. Children aged 1-5 years old require a minimum of 200ug/day to prevent symptomatic VAD[5].

In the eye, Vitamin A is essential for maintenance of conjunctival and corneal epithelia as well as night vision. VAD causes metaplasia and keratinization of mucus-secreting epithelium, which can cause conjunctival and corneal xerosis, corneal ulcers, keratomalacia, and corneal scarring. Rods are the retinal photoreceptor that is responsible for night vision. Rods have a singular photopigment, rhodopsin. Retinol is a vitamin A-derived cofactor that is required for the formation of rhodopsin; thus, VAD leads to impairment of rod function and causes nyctalopia, or night blindness due to the eye’s inability to adapt from light to dark[7].

Night blindness (Grade XN): Defective vision in dim light or night blindness is one of the most common manifestations of VAD, especially in children age 2-6 or pregnant or lactating women. Although it is considered one of the earliest manifestations, children with VAD may develop one of the more severe signs, such as corneal ulcers, after infection or diarrhea without any of the classically early signs. Children may not be able to verbalize their symptoms, and parents need to be asked if they have noticed their children behaving differently in the dark, e.g. becoming less active or fearful. Night blindness is considered to be both a sensitive and specific indicator for serum retinol levels. 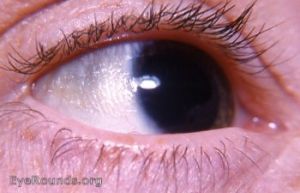 Conjunctival Xerosis. Credit: EyeRounds.org, The University of Iowa. Reprinted without modification from an open access article under the terms of the Creative Commons Attribution-NonCommercial-NoDerivs 3.0 Unported License.

Conjunctival xerosis (Grade X1A): Conjunctival xerosis is characterized by a dull and dry appearance of the conjunctiva with slight wrinkling. It is caused by the loss of goblet cells and insufficient mucin secretion, and it can be subtle and difficult to detect clinically. 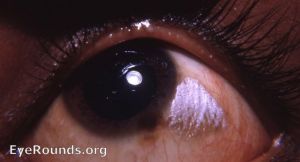 Bitot spot. Credit: EyeRounds.org, The University of Iowa. Reprinted without modification from an open access article under the terms of the Creative Commons Attribution-NonCommercial-NoDerivs 3.0 Unported License.

Bitot spots (Grade X1B): Bitot spots are collections of desquamated, keratinized epithelial cells mixed with the gas-forming bacteria Corynebacterium xerosis. They appear as triangular patches of foamy, whitish, opaque deposits, typically located on the bulbar conjunctiva near the limbus at the 3 and 9 o’clock positions. They are more common temporally. 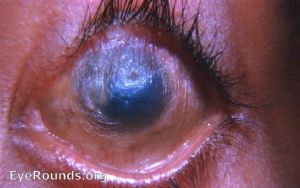 Severe corneal xerosis progressing to keratomalacia. Credit: EyeRounds.org, The University of Iowa. Reprinted without modification from an open access article under the terms of the Creative Commons Attribution-NonCommercial-NoDerivs 3.0 Unported License.

Corneal xerosis (Grade X2): Conjunctival xerosis is characterized by a dull and hazy appearance of the cornea that is caused by drying of the cornea secondary to conjunctival gland dysfunction. It may initially present with bilateral punctate corneal epithelial erosions, and it can quickly progress to the stage of corneal ulceration. Up to this stage, high-dose Vitamin A supplementation can result in the full preservation of vision.

Corneal ulceration (Grade X3A and B): Corneal xerosis can lead corneal ulceration and melting if not treated urgently. Keratomalacia, the melting away of the cornea by liquefactive necrosis, is the most severe form of xerophthalmia. It can perforate and destroy the cornea in just a matter of days. A child who appears relatively healthy but develops keratomalacia should be questioned about a recent history of measles or diarrhea, which could rapidly deplete already deficient vitamin A stores.

The World Health Organization (WHO) has a grading system for xerophthalmia as seen in the following table[9]. More detailed descriptions of the clinical signs of Xerophthalmia are below.

Patients presenting with clinical signs of xerophthalmia (or, in the case of a pediatric patient, their parents) must be questioned on dietary, medical, and social history, including alcohol intake. Be sure to ask about any malabsorptive process, as described above, or risk factors such as living in a resource-poor country or current pregnancy or lactation. Because xerophthalmia is a manifestation of moderate-to-severe VAD, it is important to ask about the systemic signs of milder VAD, including frequent GI and respiratory tract infections, anemia, iron deficiency, and development of xeroderma and phrynoderma (follicular hyperkeratosis often found on extensor surfaces, shoulders, and buttocks)[10] [7].

Aside from the ocular exam, the physical exam should include assessments for weight/body habitus, jaundice, and abdominal exam for hepatomegaly.

Keratomalacia should be treated as a medical emergency, as it is an indicator of very severe VAD. High-dose vitamin A is the treatment for all patients, and treatment can either be oral or intramuscular. Recommended Vitamin A deficiency treatment regimens are described in the following table[13]. Treatment can be adjusted as needed based on regular serum retinol level monitoring

Patients with concomitant zinc deficiency should also undergo zinc supplementation. VAD associated with malabsorptive or other processes is treated based on the severity of deficiency and provider discretion, usually involving daily treatment.

Patient education is a large component of management, and patients and their families should be educated on dietary sources of vitamin A and well-balanced, nutrient-rich diets. Alcohol abuse should be addressed if applicable. In resource-poor countries, large-scale vitamin A supplementation programs are in place.

With prompt treatment of high-dose vitamin A, the early ophthalmologic signs, such as a rod function, conjunctival xerosis, and night blindness, can resolve completely within about 2 months of supplementation, without long-term sequelae[14] [15]. Corneal xerosis and ulceration may also improve; however, they can lead to scarring and permanent vision loss[5]. 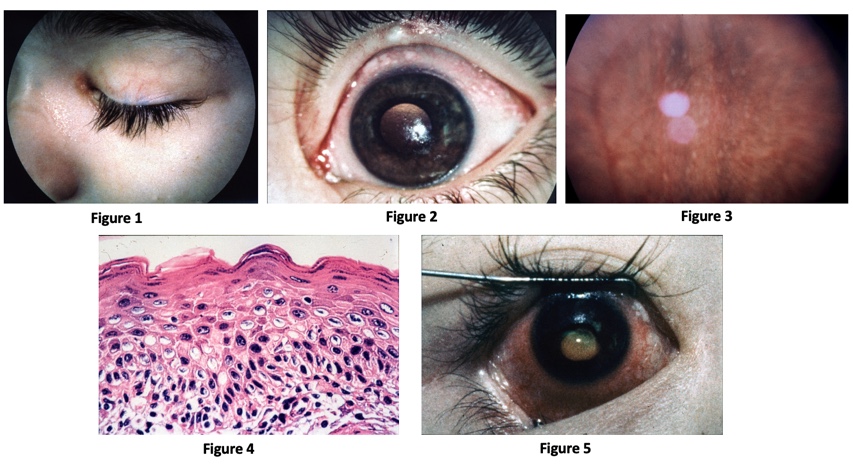 A 5-year-old boy with severe autism and an extremely poor diet (only bacon, an occasional blueberry muffin, and Kool Aid) presented with bilateral corneal ulceration. Exam revealed generalized hyperkeratosis and lash hypertrichosis (figure 1), bilateral diffuse rose bengal staining with Bitot spots at the superior limbus of the left eye (figure 2), and numerous yellow flecks in the peripheral retina at the level of the retinal pigment epithelium (figure 3). A conjunctival biopsy showed keratinized conjunctival epithelium (figure 4). 5 days later, he developed a corneal descemetocele in the right eye despite intensive antibiotic drop therapy (figure 5). He was managed with a penetrating keratoplasty and tarsorrhaphy as well as punctal occlusion. Vitamin A palmitate, 100,000 USP units, was given intramuscularly. A further 50,000 USP units was given 2 months later. 3 months post-operatively, the corneal graft was clear and the ocular surface appeared normal.[16] Images courtesy of Thomas L. Steinemann, MD.