Evisceration is a surgical technique by which all intraocular contents are removed while preserving the remaining scleral shell, extraocular muscle attachments, and surrounding orbital adnexa. The surgery often includes placement of an implant into the evisceration cavity to maintain appropriate orbital volume.

Evisceration was first described by James Bear in 1817 as a technique utilized after expulsive hemorrhage during iridectomy. Noyes and Mules respectively added to this technique in the late 19th century when describing this approach to treat ocular infection and first reporting the placement of an orbital implant.[1] [2]

Evisceration may be more difficult in cases of phthisis bulbi or microphthalmos due to a lack of sufficient scleral shell volume to adequately encase the implant. While enucleation is generally the preferred surgical choice in these patients, several modified evisceration techniques have been described whereby the globe is divided by various types of posterior or equatorial sclerotomies, allowing the placement of a larger implant in these cases.[3] Another popular technique was also described by Long in 2000 in which a posterior sclerotomy was created, the optic nerve transected, and the orbital implant placed behind both the posterior and anterior flaps of sclera. This allows for even up to 22-23mm implant sizes; and the benefit of two layers of sclera over the anterior face of the implant decreases dehiscence and implant exposure. [4] As reported by Burkat et al, the larger size implants also minimize the appearance of the anophthalmic socket; in particular, decreasing the superior sulcus hollowness, decreasing upper eyelid ptosis, and providing more orbital volume overall.

Careful pre-operative evaluation should be performed to ensure there is no intraocular malignancy in the operative eye when planning an evisceration. If there is no view to the posterior pole, B-scan or CT scan should be used to rule out malignancy, if intraocular malignancy can not be ruled out enucleation is the preferred surgery. Correct laterality of the evisceration must be carefully confirmed prior to initiation. Evisceration may be performed under general anesthesia, or in some cases, intravenous, monitored sedation with or without regional blocks. Retrobulbar administration of anesthetic with epinephrine is often given to reduce intraoperative bleeding and postoperative pain. The patient is appropriately prepared and draped in a sterile manner, and an eyelid speculum is placed.

Local anesthetic may be injected subconjunctivally to demarcate available conjunctiva and Tenon’s capsule and aid in hemostasis. Alternatively, several drops of 10% topical phenylephrine can be applied to the ocular surface before the procedure to provide hemostasis. A 360-degree conjunctival peritomy is then made at the limbus before utilizing Wescott scissors to undermine the conjunctiva and Tenon’s capsule in a careful anterior dissection. A full-thickness incision is then made at the limbus so that scissors may be introduced to excise the cornea in a circumferential manner. All intraocular contents, including uveal tract, crystalline lens, vitreous humor, and retina are then removed. Techniques for removing the intraocular contents include use of an evisceration spoon, spatula, suction, or other instruments. These contents are sent for histopathologic identification and examination. If suction is used a trap should be placed to retain the contents for histopathology. Hemostasis of the nerve and vortex veins may then be achieved with cautery and direct pressure.

Figure 1: Intraoperative photos showing excision of the cornea, placement of the implant after removal of intraocular contents, and meticulous closure.

Absolute or 70% alcohol may then be instilled to denature and remove all remaining uveal material and microorganisms from the scleral shell. Some surgeons, however, prefer to avoid this practice arguing that it may create additional irritation and edema.[5] Care must be taken to keep the alcohol within the sclera and not contact the conjunctiva. In some cases, a posterior sclerotomy or similar scleral relaxing incisions can be made to ready the evisceration cavity and allow for a larger implant to be placed. The surgeon evaluates and chooses the best implant size to restore orbital volume while ensuring appropriate position. Some surgeons choose to further bathe the scleral shell in antibiotic solution prior to implant placement. Implant material is surgeon-dependent and includes spherical implant choices of acrylic, PMMA, silicone, porus polyethylene and hydroxyapatite. The implant may be placed directly into the scleral shell or may be first wrapped in donor sclera, mesh, or other materials.[6] Other techniques include opening the posterior sclera, releasing the optic nerve, and placing the orbital implant behind the scleral shell, and closing a double-layer of sclera over the anterior implant, as originally described by Long. This allows placement of a large orbital implant, which decreases superior sulcus hollowing and anophthalmic ptosis, which ultimately results in a better cosmetic result. This was be particularly helpful in globes that a phthisical that would potentially limit the size of an implant if placed within the scleral shell only. The anterior sclera, Tenon’s capsule, and conjunctiva is then carefully closed in a layered approach before placement of a conformer. A temporary tarsorrhaphy may be performed to help the conformer remain in place. 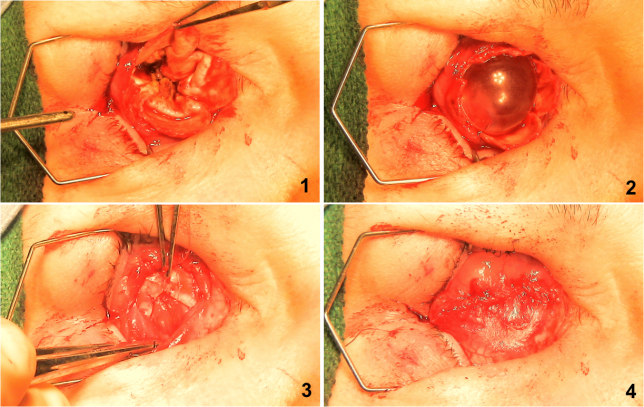 Perioperative and/or postoperative antibiotics are often administered and are especially important in cases of evisceration in the setting of endophthalmitis. The duration of antibiotic therapy has been reported to range from 10 days to several weeks, depending on the nature of the infection.[5] Some surgeons additionally will exchange surgical instruments and gloves prior to implant placement and closure to lessen the risk of contamination and prolonged infection.[5] There is no clear data to determine use or duration of prophylactic antibiotics. [7]

Post-operative pain can be managed by the placement of an additional retrobulbar administration of anesthetic or ethanol prior to patching. A pressure patch may be applied and kept in place for approximately 5 days following surgery. The patient may visit an ocularist for prosthesis fitting 6-8 weeks following surgery.

If a scleral buckle or glaucoma drainage device is present in the eviscerated eye, it should be removed. If silicone oil is present within the eye, the limbus can be incised and the silicone oil irrigated from the eye prior to peritomy.

Choice of Immediate versus Delayed Implant

Some surgeons choose to place the implant in a secondary staged procedure days to weeks after the initial evisceration, particularly in the setting of acute infection, believing that the rates of implant extrusion may be higher with primary implantation at the time of evisceration.[5] While there are no prospective, controlled trials comparing success, failure or complications with these techniques, a survey of 206 oculoplastic surgeons revealed that 46% prefer immediate implant compared to 43% preferring a secondary implant approach.[5] In one retrospective study of 67 eviscerations with primary implant placement in the setting of endophthalmitis, the rate of extrusion or other complication was quite low at only 12%.[8] A similar prospective study where 25 of the study patients had endophthalmitis and received immediate implants had no extrusion at 37.5 months follow-up.[9] The authors of these studies argue that because of these low rates of complications even in the setting of acute infection, a single surgery may be preferable due to simplicity and cost-effectiveness. [8] [9]

Advantages of Evisceration over Enucleation

In one prospective study of 100 patients comparing evisceration with scleral quadrisection and alloplastic implants versus enucleation with hydroxyapatite implants, the evisceration group showed superior implant excursion and overall lower cost.[10] A similar retrospective comparison of 32 patients undergoing enucleation and 52 patients undergoing evisceration at a single institution showed superior implant motility and less post-operative complications after evisceration, but revealed no statistically significant difference in the overall cosmetic outcome between the two groups.[11]

A large survey of 85 board-certified ocularists in 2003 asked to compare their experiences with anopthlamic patients reported overall better motility, lower complication rate, and best overall cosmesis in patients after evisceration when compared to enucleation.[12]

Disadvantages of Evisceration over Enucleation

One concern regarding evisceration is that intraoperative immunological exposure to uveal tissue may incite antigenic response in the fellow eye, increasing risk of sympathetic ophthalmia. Detailed review of the supporting evidence for this concern finds only a very small number of reported cases following evisceration. This suggests that the incidence of this entity is likely no larger than other penetrating ocular surgeries.[13] A large survey of members of the American Society of Ophthalmic Plastic and Reconstructive Surgery, the Uveitis Society, and the Eastern Ophthalmic Pathology Society yielded only a small percentage of 880 total recalled cases and no definitive, documented evidence of sympathetic ophthalmia after evisceration.[14]

While it has been argued that the surgical choice of evisceration over enucleation may increase risk in cases of incidental uveal neoplasm, a large study of 13,591 evisceration specimens found rate of unexpected neoplasm was only 1.95%.[15] The authors argue that this low incidence supports the safety of evisceration when combined with careful pre-operative evaluation. Intraocular contents should always be sent for histopathologic evaluation. In the rare case that an occult neoplasm is found, the patient should be referred for further work up and treatment.