Pigmented paravenous retinochoroidal atrophy (PPRCA) is a rare disorder of unknown etiology. The disease is characterized by pigment accumulation along the distribution of retinal veins. The findings are usually incidental with minimal effect on vision. 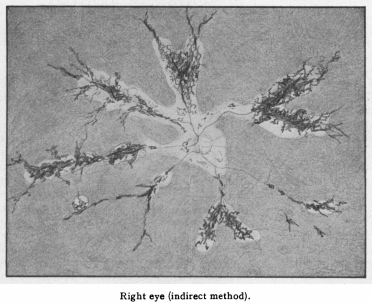 Figure 1: drawing of the first reported case PPRCA by Hewitson-Brown, which he termed retino-choroiditis radiata.

Pigmented paravenous retinochoroidal atrophy (PPRCA) is a rare disorder of unknown etiology. The disease is characterized by pigment accumulation along the distribution of retinal veins. The findings are usually incidental with minimal effect on vision.

Pigmented paravenous retinochoroidal atrophy (PPRCA) is a rare disorder of unknown etiology and the natural course is poorly understood. The diagnosis is made with a clinical examination due to the peculiar retinal findings.

The disease was first described in 1937 by Hewitson-Brown. The initial case was a 47 year old male with past exposure of tuberculosis (multiple family members) was admitted for alopecia areata. An ophthalmic examination was remarkable for bilateral pigmentary changes along the distribution of retinal vein (Figure 1)[1]. Given the patient’s exposure to tuberculosis, Dr. Hewitson-Brown associated the retinal findings with tuberculosis.  He termed the disease retino-choroiditis radiata.[1] Since then, it has appeared in the literature under multiple names including retinochoroiditis radiata, pseudoretinitis pigmentosa following measles, chorioeeretinitis striata, congenital pigmentation of the retina, melanosis of the retina, paravenous retinal degeneration, pigmented paravenous chorioretinal degeneration, pigmented paravenous chorioretinal atrophy and PPRCA.   The general accepted name of the disease is either paravenous chorioretinal atrophy or pigmented paravenous retinochoroidal atrophy.

The etiology of PPRCA remains unknown with a presumed initial inflammatory insult that leads to the slow developmental of the retinal findings. Many inflammatory and infectious causes have been associated with the disease, including sarcoidosis, Behcet’s disease, syphilis, measles, rubeola, and tuberculosis. However, no known systemic diseases have been identified as the cause of the retinal findings.  The disease is more common in males than females in the reported literature here. There have been a few cases of familial occurrence, but currently no known genes have been identified with the disease.[2]

PPRCA is characterized by retinal pigment epithelium degeneration, choriocapillaris atrophy and pigmentation along the retinal veins.  PPRCA involves both the RPE and the choroid. In a study by Linek et al, five dogs with funduscopic changes similar to human findings of PPRCA were observed and a histopathological examination was completed for one case.  On histopathological examination the areas retinal atrophy transitioned to normal retina abruptly. The retinal atrophy was characterized by loss of photoreceptor outer segments, outer nuclear layer, and inner nuclear layer. The inner plexiform layer and ganglion cell layer were reduced.  The RPE layer was partially disrupted with Bruch’s membrane intact.[3] No known histopathological examinations have been completed on a human eye. The use of spectral-domain optical coherence tomography (SD-OCT) combined with fundus autofluorescence allows for in vivo characterization of the disease.  In early stages of the disease, the outer retinal layers are thinned (including outer nuclear layer and external limiting membrane) and the choroidal thickness is reduced, while the RPE is not affected.[4] Late in the disease, the RPE is affected and is associated with areas of reduced choroidal thickness.[5]

The typical patient presents for an ophthalmologic exam and incidentally is found to have PPRCA. The majority of patients are asymptomatic at presentation or have mild blurred vision. The exception is patients with macular involvement, where vision can be severely reduced on presentation.

Figure 2: Right fundus image of a patient with PPRCA with bone corpuscle pigmentation accumulating along the distribution of the retinal veins with adjacent chorioretinal atrophy.

PPRCA is an incidental finding and vision is rarely affected. Color vision is unaffected. Formal visual field testing may manifest scotomas along areas of densely involved retina. There are no specific findings on anterior and vitreous examination.

The funduscopic examination reveals bilateral involvement, with unilateral and asymmetric manifestations previously reported.  The retinal findings consist of bone corpuscle pigmentation, coarse pigment clumps and fine pigmentary changes along the retinal veins (Figure 2).  The pigment accumulation and retinochoroidal atrophy begins a distance from the optic nerve head with the unaffected retina normal appearance.  The pigment accumulation typically extends along the posterior pole and into the periphery.  In marked cases, areas of retinal sheen are seen in the posterior pole.

Macular involvement is rare but cystoid macular edema[6], pigmentary macular degeneration, macular RPE atrophy and lamellar macular holes have been reported. The optic nerve appears normal with no gliosis or atrophy and the retinal vessel caliber are normal.

Figure 3: Fundus autofluorescence of the right eye of  the patient in Figure 2 with areas of hypofluorescence along the involved retina.

Fundus autofluorescence (FAF) shows areas of hypoautofluorescence in the affected areas due to overall loss of RPE cells and thus lower lipofuscin levels in these areas of atrophy (Figure 3). There may also be some hyperautofluorescence mixed in, indicating some level of RPE dysfunction and lipofuscin accumulation those areas.  [7]

Optical coherence tomography (OCT) in areas RPE clumping are hyperreflective with shadows. The retinal layers are thin with increased backscatter and disorganization of the RPE choriocapillaris junction. [5][8]

Fundus fluorescein angiography (FFA), shows hyperfluorescence or chorioretinal atrophy depending on the lesion. FFA shows windows defects with hyperfluorescence due to RPE degeneration and blockage in areas of pigment clumping. No fluorescein leakage within or beneath the retina is noted.

Indocyanine green angiography (ICG) shows hypofluorescence within the atrophic lesions and extends along areas that are hyperfluorescent on FFA, which indicates choriocapillaris atrophy that is more extensive than that found on FFA.[9]

Electroretinogram (ERG) and electrooculogram (EOG) findings are variable and nonspecific with findings ranging from normal electrodiagnostic data to markedly abnormal. The variation in findings is attributed to varying ages and severity of the disease.[2]

The diagnosis of PPRCA is based on the typical fundus appearance and diagnostic testing helps confirm the diagnosis.

PPRCA is non-progressive or slowly progressive disease. There is no specific treatment for PPRCA.

Patients with PPRCA have good visual prognosis with slowly progressive disease. In patients without macular involvement, visual acuity is minimally adversely affected. Visual field lose does occur with time but at a rate slower than typical retinitis pigmentosa. [10]