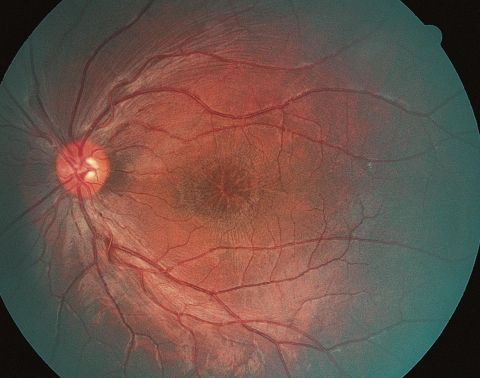 X-linked Retinoschisis (XLRS) is an inherited retinal disorder that can cause early vision loss in males.

X-linked retinoschisis, with a prevalence of about 1 in 15,000 to 30,000, is one of the main causes of juvenile macular degeneration in males.[2] It is characterized by symmetric bilateral macular involvement beginning in the first decade of life.[3] It is caused by a large variety of mutations in the RS1 gene on Xp22.1-p22.3, which encodes the protein retinoschisin. This protein is involved in intercellular adhesion and likely retinal cellular organization. X-linked retinoschisis is inherited in an X-linked manner with complete penetrance and variable expressivity. Most affected individuals are males, as heterozygous females are rarely affected. However, retinoschisis has been reported in non-consanguinous females.[4][5] The phenotype can be markedly variable even within the same genotype, and can involve the peripheral retina.

X-linked retinoschisis is linked to mutations in RS1 on Xp22.1-p22.3. The gene encodes a 224-amino acid protein called retinoschisin, which is secreted by photoreceptors. [6] This protein is found throughout the retina, and is thought to be involved in cell-cell adhesion and intercellular matrix retinal architecture development through interactions with αβ crystallin and β2-laminin. On histopathological examination, the splitting in X-linked retinoschisis occurs predominantly in the nerve fiber layer. [7]

Patients typically present at school age complaining of poor vision or difficulty in school, although they may present in infancy with nystagmus or strabismus. Family history of childhood eye disease consistent with X-linked inheritance should be assessed. 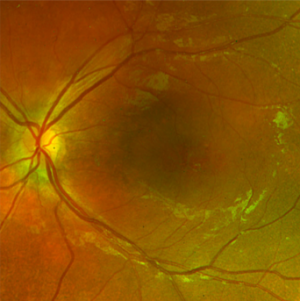 Optos photo of a child with foveal retinoschisis

There is large variation in disease severity among patients, even among patients with the same genetic mutation. Visual acuity may range from 20/20 to blindness, and depends on the amount and location of schisis. On first presentation, affected males typically have a visual acuity of 20/60 to 20/120. During the first and second decades of life, visual acuity may deteriorate slightly but then remains relatively stable until the fifth or sixth decade, when slowly progressive macular atrophy can arise. Visual loss may later progress to legal blindness (acuity <20/200).[3]

Peripheral vision may be normal in the unaffected areas. Absolute scotomas may be present in areas of peripheral retinoschisis, which are often inferotemporal. Color vision is often normal.

On fundoscopic examination, 98-100% of patients have foveal schisis, noted as a spoke wheel pattern radiating from the fovea and a domelike elevation of a thin layer of retina. It can be more easily identified with ophthalmoscopy using a red-free light. Schisis is most often in the macula, but occurs in the periphery in more than half of patients.[8] The bullous retinoschisis may improve over time. Individuals > 50 years old commonly have pigmentary changes and retinal pigment epithelium atrophy in the macula. The inner retina of the retinoschisis can develop large oval gaps.

Subretinal linear fibrosis, pigmentation, white retinal flecks, vascular attenuation, and vascular sheathing may also be present. In extreme cases, the inner layer is absent with only the retinal vessel floating in the vitreous cavity which is called a vitreous veil. Peripheral dendritiform lesions which consist of sclerosed vessels may be noted.

Visual function may be severely limited with progression to retinal detachment, which is most often rhegmatogenous and occurs in 5-20% of cases. Vitreous hemorrhage is another common complication, especially with peripheral schisis, and may result in deprivation amblyopia. Hemorrhage may also occur within the schisis cavity. Vitreous hemorrhage and retinal detachment are the main causes of complete vision loss.[9] 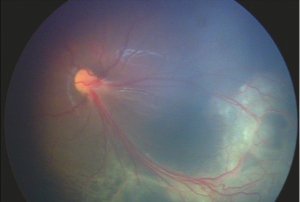 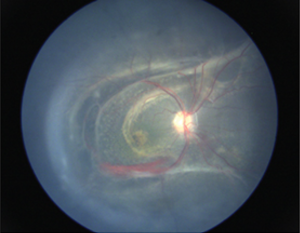 Genetic testing is available for the RS1 gene that encodes retinoschisin.

For those <10 years old: Annual evaluation by a pediatric ophthalmologist or retina specialist.[3]

Patient education: Avoid head trauma and high-contact/impact sports due to the increased risk of retinal detachment

For those with low vision: Low vision aids (large-print textbooks), preferential seating in the front of the classroom, handouts with high contrast.[3]

Carbonic anhydrase inhibitors may help to improve the schisis cavities seen on OCT. Topical dorzolamide or systemic acetazolamide have both been reported to be beneficial in improving the cystic-appearing spaces on OCT.[12][13][14] Clinical improvement can be monitored with visual acuity improvements and reduction in the cystic fluid on OCT.

Onset usually occurs in the first decade of life, and visual acuity (VA) at first presentation is usually 20/60 to 20/120. VA often deteriorates in the first and second decades, but then is typically stable until the fifth or sixth decade (there may be some reduction in VA due to macular atrophy). By the sixth or seventh decade, VA may drop to legal blindness (i.e. VA <20/200).[3]